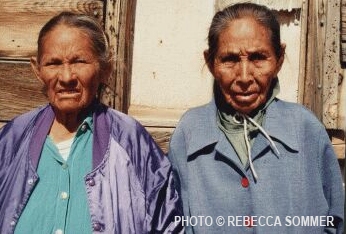 Anna and Ella Begay are two Dineh (Navajo) sisters who live alone
in a 10 foot by 12 foot shelter on desolate land in Coal Mine Mesa,
in northeastern Arizona. While the traditional Dineh do not keep
track of their age in years, the women are both probably over the
age of 80. Ella is deaf and partially disabled. Living without electricity
or running water, they survive by herding a few sheep and coaxing
a few crops from the arid soil. Their only transportation is their
two horses. Three donkeys haul water and firewood for them and also
help plow their small field.

On Tuesday, February 23, 1999, an army of 13 armed police officers
and U.S. Bureau of Indian Affairs (BIA) officials arrived over the
rugged trails in six police vehicles and two impoundment trucks.
The squadron confiscated the sisters' horses and donkeys from their
corral. The sisters lost their only possessions and the key to their
survival on these harsh lands. Without their livestock, the chances
that the elderly sisters will survive another year are diminished
- which is the exact purpose of the attack. 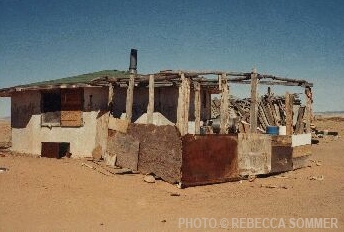 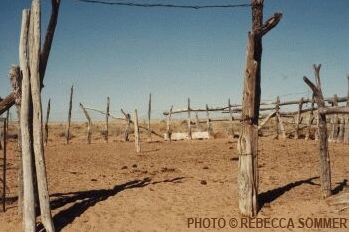 The US has begun what it hopes will be the final steps in a campaign
to exterminate Dineh families who became trespassers on their traditional
land as a result of a 1974 law pushed through Congress by the coal-fired
power industry. The industry believed that the eviction of all residents
of an area larger than the state of Rhode Island would simplify
their access to the continent's richest deposits of low-sulfur coal.
The land title was transferred to the Hopi Tribal Government, which
at the time was dominated by John Boyden, a white attorney also
working for the Peabody Coal Company. The tribal government was
orignally installed by the US for the purpose of granting mineral
leases over the strong objections of traditional Hopi and continues
to receive 80% of its funding from Peabody Coal.

Over the next 25 years, over 12,000 Dineh were forcibly relocated
in a program described by its former director Leon Berger as "a
tragedy of genocide and injustice that will be a blot on the conscience
of this country for many generations". Many were moved to the "New
Lands", an area near Chambers, AZ, too arid to support their livestock
and contaminated by the largest spill of radioactive waste in US
history, which occurred when a containment dam at a uranium mine
burst upstream on the Rio Puerco, which runs through the land. Others
were moved into cities for which they lacked survival skills, and
where they became caught in a circle of homelessness, alcoholism, and suicide.

Several thousand Dineh still remain on their ancestral land in defiance
of all government attempts to drive them away. The US has fordidden
them to make any repairs on their homes - even to repair broken
windows - and some have taken shelter in bunkers dug into the earth.
Firewood is confiscated in winter, and law enforcement officials
harass and threaten them with eviction and jail sentences. 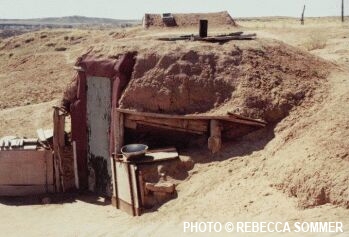 The Bunker of Joan Yellowhair.
Photo © by Rebecca Sommer

A law passed by Congress in 1996 requires the US to complete the
eviction process by February 1, 2000. Some families were offered
leases that allowed them to remain as tenants upon their land with
no civil rights and with- out a means of survival.
Those who refused to sign or who were not eligible will be
evicted in the next 11 months.

The first step in the US eviction campaign is the removal of livestock.
The targets are elderly people who survive by herding sheep as their
families have done for hundreds of years. Their livestock is the
centerpiece of their daily lives in which their culture and religion
are interwoven with their land and animals. The herds have a different
significance to the US government. It is the key to the people being
able to maintain a fiercely independent lifestyle living in remote
areas without electricty, running water, telephones, or assistance
from the government. The government hopes that destroying their
herds will turn them into helpless dependents upon the government
who will be unable to resist the eviction process.

The livestock campaign is based on permits issued under terms set
up in the 1996 law. People who either have refused or were ineligible
to sign leases are not allowed permits for their livestock. People
who signed leases are eligible for permits, but even they have found
that many of their livestock will be taken, as the number of permits
issued is less than needed to cover their livestock. The BIA began
sending notices in January notifying families of its intention to
begin removing non-permitted animals, and the confiscations are now underway.

The confiscation attacks took place at several other homes during
the week, and over the next few months they will occur hundreds
of times as the federal and tribal authorities remove all un-permitted
animals from the region. Most of the people targeted for these attacks
are over the age of 65, and some are over 90. They live in terror
- not knowing when they wake up each morning if this will be the
day when the authorities target their home.

Resistance to impoundments is treated severely. Rena Babbitt Lane,
whose lost livestock in a confiscation on Monday, February 22, had
her hand broken when she tried to stop a previous impoundment. Other
people have experienced beatings or been arrested when they tried
to resist confiscations in the past. But past confrontations took
place in connection with minor issues such as access to grazing
areas. The campaign now being launched is targeted at the permanent
elimination of the herds and ultimately with the removal of the
people, so that the level of tension and desparation has escalated.
For the last four years, the US has been training local police in
weapons and tactics which will be used in the eviction campaign over the next year.

The BIA publicly claims that the program is motivated only by a
need to protect the rangeland for the benefit of the community.
But as demonstrated in community meetings February 20-23 attended
by most of the affected families, the policy is strongly opposed
by the people whose interest the government claims to be protecting.
Within the local community, the claim that the invasion is connected
to ecology is not believed. The fact that the government began sending
eviction notices to many families at the same time that it started
the confiscation process indicates the true purpose of the program. 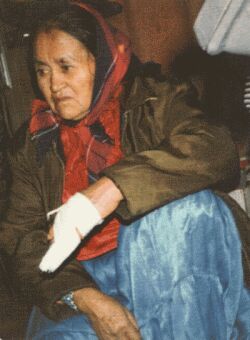 The Dineh ask other US citizens and people throughout the world
to pressure the US government to stop the genocide. The Dineh have
lived on their ancestral lands for hundreds of years prior
to the arrival of the Europeans on this continent, and believe
that it is their right to remain on these lands and to pursue their
traditional religion and way of life. The US claims that it is resolving
a land dispute between Dineh and Hopi people, but the people have no quarrel:

"We want everyone to know that the Navajos are not the ones taking
our land, but the United States. The Hopi and the Navajo made peace
long ago, and sealed their agreement spiritually with a medicine
bundle. It is through the puppet governments, the 'Tribal Councils'
forced upon both nations by the United States, that the illusion
of a conflict has been created on the basis of the false modern concept of land title."
[Martin Gashweseoma, Keeper of the Hopi Fire Clan Tablets]

The problems in the region were caused by US and corporate intervention,
and the US has the obligation to correct these problems in a way
that respects the right of the Dineh to continue their traditional
way of life on their ancestral lands.