Hands Across the Fenceline 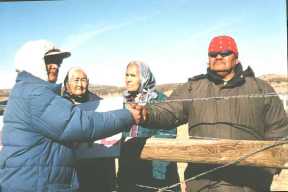 This meeting of the Traditionalist Hopi and the Traditional Dine’ dispels the public relations myth that the Navajo and Hopi are in a range war. Emory (*) stated, “There is no war between our people, it is all political”.

In response to press articles that stated that the Dine’ and their non-indian supporters were offending the Hopi People by interrupting a time of ceremony for the February 1st rallys- Emory noted, “Since when have the tribal councils cared about ceremony? They installed these sewer lines during ceremonial times when work like that isn’t traditionally permitted.
They even dug up places where our spirit’s live. Why are they concerned about their ceremony’s now? If the tribal council cared about our ceremony’s, they wouldn’t have set the deadline date during our ceremonial season.”

On February 1st 2000, a Hopi Traditional and a gathering of Dine’ Elders gathered at the fenceline that divides the Hopi Partition Lands from the outside world. In front of a media squadron, Dine’ elders cheered as Dennis Khootsi, Hopi, and John Benally, Dine’, shook hands across a fence that has scarred the lives of both tribes. 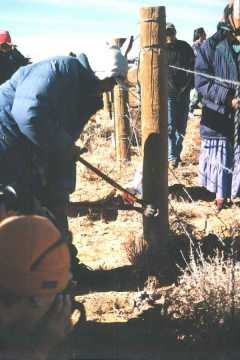 John Benally reached for the wire cutters, and claimed that he was cutting the fence for “all of the people on the land, for all my bro’s”.

Carlos Begay, Jr. also approached the fence with the bolt cutters. He spoke to the crowd, “This is for the youth on both sides of this fence, to keep their traditional ways alive.” 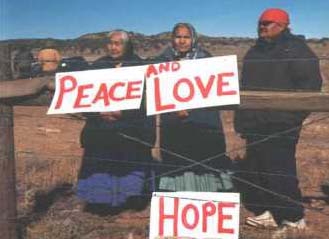 Louise Benally and supporters, left from the Anna Mae Camp on their way to Tucson for a rally, and left this sign at the HPL fence line expressing what Grandmothers should have in their lives instead of relocation.

In Phoenix, activists occupied the campaign offices of Senator John McCainwho sponsored the bill which President Clinton signed authorizing the transfer of the Hopi Partition Lands to the Hopi Tribal Council making the Navajo who live there, trespassers on their own land, as of February 1st 2000. This legislation has worked out the Hopi Tribal Council as this
season’s principal adversaries, promoting the myth that there is a intertribal dispute. Though the Hopi’s will be utilizing the U.S. Federal Marshalls to do the evicting, despite the fact that everyone claims the U.S. Government isn’t involved.

The Hopi Tribe also claims that the removal of the Dine’ isn’t about Peabody Coal, yet on February 1st, the Hopi Tribe opened a coal outlet near Hotevilla that provides Hopi’s with unlimited free coal, stocked by Peabody.

The Hopi Tribe also negotiated the expansion of the Kayenta Mine, heading directly into Navajo family homesteads, before the February 1st deadline. 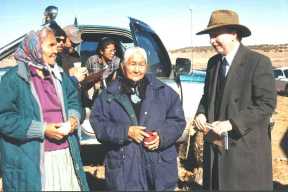 Grandmothers expressing their concerns with Mick Harrison, an attorney with the
Northern Arizona Legal Defense Fund.

30 Japanese Sundancers ended their prayer walk from the San Francisco Peaks
in Flagstaff, crossing the HPL and holding their closing ceremony in Cactus Valley, near Big Mountain.

Katherine Smith, a Dine’ Matriarch and resistor, held a press conference on February 1st 2000 at the HPL fence line near her home. She memorialized the relocation deadline by telling the story of how she held off the BIA crew installing the fence, using her shotgun. 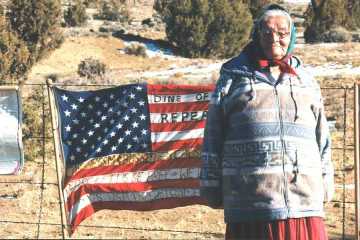 She spoke in front an American Flag draped over the fence, with Public Laws that affect the Dine’ people written in the stripes,“I am a very good shot, I wasn’t going to hurt them. I shot right over their heads to let them know to stop what they were doing.” Next to her in a glass case was her shot gun that she used that day, 21 years ago, to protect her family and her freedom.
She also had on display a baton that she grabbed from a BIA officer just before “ditching” them in a nearby wash; effectively counting coup. “I spent two days in jail, one in Hopi, one in Navajo.”

“Now did anyone out there show you this, today?”

She also pulled out a map detailing America before Columbus came. “The nation is all red, with Indian people”. “Here is this little white speck, and through the years, the Nation has become all White, with just a little bit of Red.”

She spoke in regards to the infamous intertribal dispute issue. “This isn’t my problem, this is Peabody’s problem, this is the White Man’s problem. I am not causing any trouble, they are causing this trouble.”

When asked by reporters, “What are you going to do if the Hopi come and
evict you off your land?”

Speaking to the world she replied, “What are YOU going to do?”